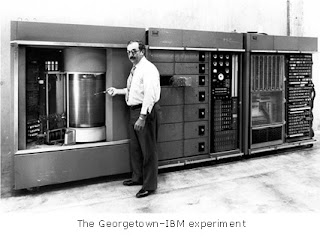 Conceived and performed primarily in order to attract governmental and public interest and funding by showing the possibilities of machine translation, it was by no means a fully featured system: It had only six grammar rules and 250 lexical items in its vocabulary of stems and endings.

This complete dictionary was never fully shown, only the extended one from Garvin's article. Apart from general topics, the system was specialised in the domain of organic chemistry. The translation was carried out using an IBM 701 mainframe computer, launched in April 1953. Sentences had to be punched onto cards.

The Georgetown-IBM experiment is the best-known result of the MIT conference in June 1952 to which all active researchers in the machine translation field were invited. At the conference, Duncan Harkin from US Department of Defense suggested that his department would finance a new machine translation project.

Jerome Weisner supported the idea and offered finance from the Research Laboratory of Electronics at MIT. Leon Dostert had been invited to the project for his previous experience with the automatic correction of translations, back then mechanical translation; his interpretation system had a strong impact on the Nuremberg War Crimes Tribunal. The linguistics part of the demonstration was carried out for the most part by linguist Paul Garvin who had also good knowledge of Russian.

Over 60 Romanized Russian statements from a wide range of political, legal, mathematical, and scientific topics were entered into the machine by a computer operator who knew no Russian, and the resulting English translations appeared on a printer.

The sentences to be translated were carefully selected. Many operations for the demonstration were fitted to specific words and sentences. In addition, there was no relational or sentence analysis which could recognize the sentence structure. The approach was mostly lexicographical based on a dictionary where a specific word had a connection with specific rules and steps.

-Operation 0: An exact equivalent for an translated item exists. Any further steps needed.

-Operation 1: Rearrangement of the position of the words. AB > BA

-Operation 2: The several choices problem. The result is based on the consecutive words (maximum of three).

-Operation 3: Also several problems. But the result depends on the previous words (maximum of three).

-Operation 4: Omissions of the lexical (morphological) item. The source item would be redundant.

-Operation 5: Insertion of the lexical (morphological) item. The item is not present in the output language.

Well publicized by journalists and perceived as a success, the experiment did encourage governments to invest in computational linguistics. The authors claimed that within three or five years, machine translation could well be a solved problem. However, the real progress was much slower, and after the ALPAC report in 1966, which found that the ten years of long research had failed to fulfill the expectations, funding was reduced dramatically.

The demonstration was given widespread coverage in the foreign press, but only a small fraction of journalists drew attention to previous machine translation attempts.